The first ever European Veterans Fencing Team Championship was hosted in Loughborough in 1991 with just 85 people competing from across the continent. And now in 2016 the European Championships celebrated its 25th year and saw quadruple the amount of entries from its first year competing from over 20 nations in 100 teams.

Organised by British Veterans Fencing the event returned to the UK where it all began and hundreds of fencers enjoyed the four-day tournament from 05 – 08 May at Medway Park, Gillingham. The European Championships are celebrated for their spirit of friendship and fair play and the hard-fought matches are always a joy to participate in and watch, with this year being no different. Team competitions across the weekend-long event were held for men and women in Foil, Saber and Epee in Veteran and Grand Veteran categories. 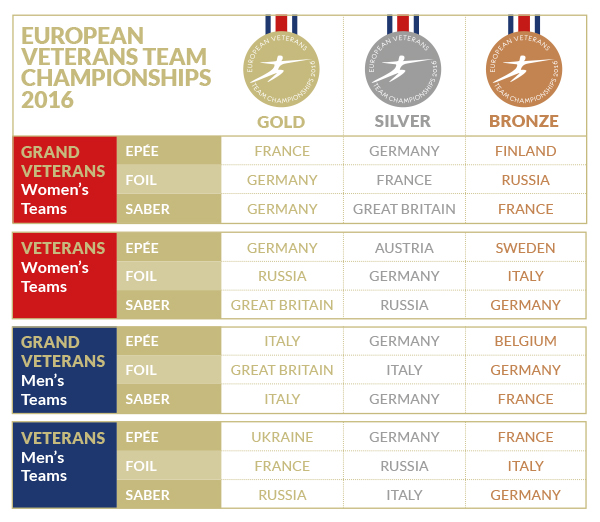 Medals UK has enjoyed a long-standing relationship with British Veterans Fencing, having produced medals for them for the last 5 years. BVF, which supports fencers of mixed abilities aged 40 years plus, hosts national competitions throughout the year as well as helping to coordinate trips or organise international events, such as this year’s European Championships.

We’re delighted to have played a small part in the success of this year’s event and that the European Veterans Fencing Team Championship Medals have been distrusted so widely across the continent. We’d like to congratulate all of the winners and here’s to the next 25 years of the event, and more!