I’ve never been a runner, I’m just not built for it. It hurts my joints, I’m slow and if I’m honest I moan the whole time. Never the less, last year I set myself a challenge to run a 5k race. After a few months of what I deemed hard training I did it. It was a glorious day, I completed the run with minimal moaning and I felt good about myself, I even had fun. I think it would be safe to say that most people these days have entered or supported a fun run of some kind. It’s a popular thing to do, but imagine if you had no choice in the matter. Imagine if the run wasn’t “fun” but you were running for your life, with over 70lbs of kit on your back, through rough, muddy, terrain whilst being fired at on a battle field rife with poisonous gasses, water, smoke and blood, towards your enemy at The Battle of Passchendaele.

2017 commemorates the 100th year since the Battle of Passchendaele where over 325,000 allied soldiers died. Soldiers from Britain, France, Canada, New Zealand, Australia, South Africa, India, Belgium and France fought and died together on the battle field. These losses were attributed to the German Army fighting better than expected, their mustard gas attacks left many men with chemical burns and damaged lungs and to add to the horror the area saw the heaviest rainfall in more than 30 years. Many men and war horses drowned in the liquid mud, and even tanks became stuck. 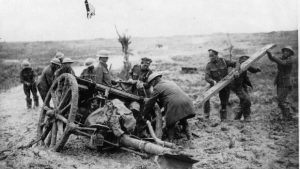 Military Charities and Support Groups such as Help For Heroes, The Royal British Legion, The Soliders Charity play a major part in supporting our Armed Forces and raising awareness historical events like this. We’ve worked with The British Legion for several years now to create Commemorative Medals for The Great Gwent Poppy Run, an annual event that this year will take place in the village of Panpergwm, Monmouthshire, South Wales to commemorate the abhorrent 103 day Battle Of Passchendaele.

On the 5th November runners will gather at the meeting point before being marched to the start of the event in groups of 40, much like the Soldiers of Passchendaele. Participants will then complete a gruelling but fun, 10k run through a no-mans land of mud, water, smoke and obstacles before having to dash unshielded to the relative safety of the finish line. Here they will receive a goody bag, which includes a personalised gold sports medal specially commissioned for The Great Gwent Poppy Run produced by Medals UK, which measure 50mm in diameter and feature an antique finish and printed ribbon that will mark their achievement in finishing the run and be a wonderful keepsake.

I wish the best to everyone taking part in any aspect of the Great Gwent Poppy Run. I am full of admiration for the men and women that enter, it’s some way off my sunny 5k jog last summer: it’s cold, it’s wet, it’s hard work and they’re raising money for the Poppy Appeal helping members of the Royal Navy, British Army, Royal Air Force, veterans and their families. The British Legion are doing an incredible job too, helping the memory of these men who fought such a incredulous battle for their country “Live On.”

I have a new respect for the men that fought at Passchendaele 100 years ago and lost their lives doing so in the most horrifying situation. That’s why I’m off out now to my local supermarket to visit the Poppy Seller and buy a Poppy, it’s not a medal, but I will wear it with pride, and on the 11th November during the two-minute silence that marks the end of The First World War I will remember the men of The Battle of Passchendaele.