So I think most of us have been floating on a cloud of national pride following Team GB’s success in this year’s Olympics. There’s now just one day to go until the start of the 15th Paralympic Games and we’re hoping for an equally successful story to follow.

To boot we think there’s a pretty good chance that some athletes who took home our Medals UK medals late last year will celebrating their own Paralympic medals too! Read on to find out more…

So way back in 1960 the first official Paralympic Games began with 400 athletes from 23 countries taking part in the event hosted in Rome. A whopping 4,350 paralympians are set to compete in this year’s games, making Rio 2016 the largest Paralympic Games to date.

For the first time ever there will be two refugee athletes competing in an independent team under the Paralympic flag. The Syrian-born swimmer Ibrahim Al Hussein and Shahrad Nasajpour, an Iranian discus thrower, will form the Independent Paralympic Athletes (IPA) team. Although athletes have previously competed as independents, this will be the first time that those with refugee and asylee status will receive special recognition and a dedicated support team. The athletes will help to raise the awareness of the plight of thousands of asylum seekers who make difficult, long and treacherous journeys everyday for a better life, often with impairments.

The IPA will be the first team to march in the opening ceremony on Wednesday 07 September and will compete alongside the world’s best para-athletes from 165 countries in the Games, which concludes on Sunday 18 September. 264 athletes, including guides, pilots and competition partners will represent ParalympicsGB, in 19 of the 22 sporting events.

Paracanoeing and para-triathlon join the Paralympics programme for the first time in Rio and we have high hopes for medals in these sports with British athletes having numerous World and European titles in these fields. Likewise our highly decorated Para Cycling team will be hoping to emulate the success of Team GB in the Olympics who took home more cycling medals than any other country.

The team includes Dame Sarah Storey, our most decorated female Paralympian, who will be competing in her 7th Paralympic Games in a hope to add to the total of 11 gold, 8 silver and 3 bronze paralympic medals she already holds. She is joined by a number of Paralympic Games veterans including Jody Cundy, David Stone and Crystal Lane. Jon-Allan Butterworth, a former RAF technician who came through the British Paralympic Association (BPA) and Help for Heroes joint programme ‘Front Line to Start Line’ to win 3 silver medals in London 2012 also joins the team.

We’ll be well-represented in the tandem events for VI riders as two female and two male riders, plus pilots will compete, namely: Stephen Bate and pilot Adam Duggleby, Neil Fachie and pilot Pete Mitchell,  Sophie Thornhill and pilot Helen Scott, Lora Turnham and pilot Corrine Hall. And newcomers Megan Giglia, a former sports coach who suffered a stroke in 2013 and Hannah Dines are amongst the names to make up the 20-strong Para Cycling team. 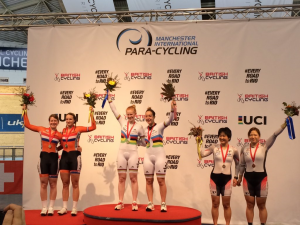 Regular readers of our blog will recognise a number of these names as medal winners from the Para Cycling International event in November 2015, which we produced the winner’s pendants for. Sophie Thornhill, Helen Scott, Neil Fachie, Pete Mitchell, Crystal Lane, Jon-Allan Butterworth and Megan Giglia all took home Medals UK medals from the event held at the National Cycling Centre in Manchester. The event saw the team take home 12 golds, 5 silvers and 7 bronze medals and secure Paralympic qualifying points towards these Rio Games.

We can’t wait to see the team in action and are hoping that they can add to their individual collection as well as help ParalympicsGB beat the target of 121 medals that has been set for them. It would be amazing if ParalympicsGB could mirror the achievements of Team GB in beating the medal tally from the last home Games and we are  behind them all the way – good luck to all our Paralympians!